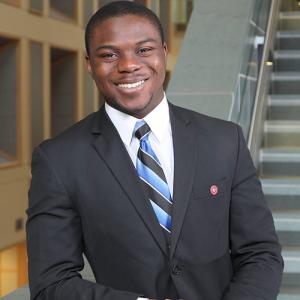 "You don’t always have to wait until a certain moment when you feel qualified or everything feels right to start doing something...the key is to start— to just do something. It’s too easy to let four years fly by without ever tapping into the resources around you or thinking outside of yourself.” - Naedum DomNwachukwu

Seniors Adaeze Okorie and Naedum DomNwachukwu are two Meinig Family Cornell National Scholars who were instrumental in the planning of Cornell’s first ever African Development Conference, which took place this past October. Adaeze is a student in the College of Agriculture and Life Science majoring in biology and society while Naedum is studying biomedical engineering in the College of Engineering.
Both Adaeze and Naedum are members of Scholars in Our Society and Africa (SOSA), a student-run Cornell organization that seeks to build a more prosperous future for local and global communities by promoting educational equity in the U.S. and in Africa. They explained that the idea to host a conference at Cornell was originally planted in January 2019 when the group started thinking about ways they could engage with a larger community of students and others to brainstorm ways to support efforts all over Africa to bring about change. As such, SOSA spent most of the Spring 2019 semester thinking about their goals for such a conference and the logistics of bringing something of its magnitude to fruition.

Taking place this past fall, the conference was a great success! Explaining her biggest takeaway from the event, Adaeze described how inspiring it was to see students from different colleges—Cornell’s seven as well as other universities, such as SUNY Stonybrook, Columbia, Harvard, etc.—come together to discuss their desire to support social changes in various countries in Africa. Despite their disparate backgrounds and academic fields of study, all the conference attendees were looking to empower communities rather than try to map their own desires onto projects, without community input. Adaeze was especially moved by an impactful talk co-lead by Cornell History Professor Judith Byfield and Professor of African and Comparative/International Politics at Ithaca College, Peyi Soyinka-Airewele. This talk emphasized the importance of recognizing the agency within communities and championed the impact of coalition building in a manner that centers community needs and builds upon work already being done in the community. Naedum was also especially struck by just how many students at Cornell and other institutions are interested in using their skills, knowledge, and resources to give back, and the opportunities for community building.

Describing their stand out moments at Cornell, both Naedum and Adaeze pointed not to particular experiences, but rather, to spaces. The most impactful moments of their Cornell experience occurred while connecting with their peers and mentors, and seeing the ways, and places, in which they’ve found community on campus. For them both, Meinig has been one of these spaces of connection and growth. In particular, they both spoke about the importance that Meinig’s mandatory Freshman Forum had on their Cornell experience. The Forum’s weekly meetings allowed them to build sustained relationships with fellow leadership-oriented Cornellians, as well as learn a lot more about the variety of resources Cornell has to offer. Additionally, the formation of those connections inspired both to bring their talents to the various communities they’ve since formed on campus.

When asked if they had any advice for new Meinig Scholars, they both had valuable insight into finding one’s own path. Naedum emphasized being proactive in getting involved, and the importance of knowing where one is and what one has, saying, “You don’t always have to wait until a certain moment when you feel qualified or everything feels right to start doing something. Rather, you can get involved in some way at whatever level you are at currently. Even as a freshman, there are ways to get involved on campus, there are ways to make a difference and be a positive influence on the people around you. Even if you are not, the ‘leader’ of the organization. You can be the ‘waterboy.’ The key is to start— to just do something. It’s too easy to let four years fly by without ever tapping into the resources around you or thinking outside of yourself.” Building off of Naedum’s advice, Adaeze stressed the importance of not comparing yourself to others, recognizing the unique leadership styles one can bring to the spaces one finds themselves in. She said, “At a place like Cornell it is so easy to look around you and think you’re not doing enough. It can be really intimidating and discouraging to struggle for the first time, especially if you are used to always being at the top. Allow yourself to learn from your struggle and find your own pace and acknowledge that you are of value in the spaces in which you are trying to be a leader. It can be humbling and taking that time to understand your own process of doing things will help you be a better leader.”

Following graduation, Naedum is slated to begin a MD/PhD program while Adaeze plans to work at Cornell Health for a year as a Public Health Fellow before pursuing her Master’s in Public Health, and hopefully, a PhD. We are so excited for these two amazing Meinig Scholars!