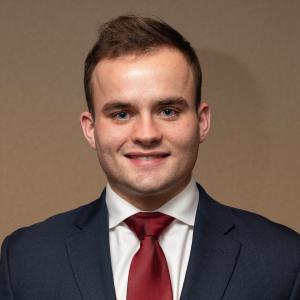 "I believe I have an incredible support system due to the different communities I am a part of on Cornell's campus. I can wake up for early morning workouts with my ROTC Battalion, go to class and work with my peers from the Dyson school, go to practice and workout with my Sprint Football teammates, and end the day with my friends I live with. It is special to have an incredible group of friends and mentors no matter where I go on campus." - Connell Rae

Connell Rae is one of this year's Class of 1964 John F. Kennedy Award winners. This award is supported though The Public Service Center to encourage well-qualified students to enter careers in government or other public service fields.

Connell is an Applied Economics and Management major in the College of Agriculture and Life Sciences. An ROTC student, he was awarded the Distinguished Military Graduate and Superior Cadet Awards and is an inductee in Scabbard and Blade.

Before beginning Cornell, he attended the Morris County NJ Fire Academy and worked as a volunteer fire fighter for the Millington Fire Department, where he was Captain of firefighters under age 18. As an Army ROTC Cadet, he ranks first in his class and tenth in the nation, served as a military ambassador to the Peruvian Army, and as Battalion Commander at Cornell, mentors younger cadets. Connell’s passion is veterans’ rights and, in particular veterans’ mental health. He has found that, despite the billions of dollars expended on the VA Healthcare system, veterans often find themselves bereft of assistance and having to fend for themselves as they struggle with the aftermath of their service.

As a volunteer firefighter, he was exposed to the harsh reality of drug abuse firsthand, specifically opioid addiction. As he transitions to military service after graduation, he will work to actively combat addiction, train soldiers and veterans in the use of Narcan, and connect them with resources nationwide.

Besides his ROTC work, Connell is a student athlete, member of the All-academic Collegiate Sprint Football League and winner of the Rick Casselman Coaches Award. He is also a member of Delta Chi. Connell’s academic credentials match his service record, as he maintains a 3.9 average and served as a Teaching Assistant in the rigorous undergraduate Dyson program.