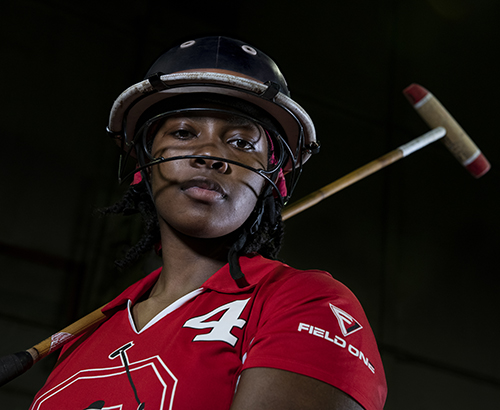 Labeled “Trailblazer” and “Barrier-Breaker,” Cornell women’s polo senior Shariah Harris embodies those labels, but doesn’t let them define her. Known for having a unique skill set on the horse unlike what’s typically seen in women’s polo, Harris has caught the eye of polo’s elite, not just as one of the best women’s intercollegiate polo players, but as one of the top players in the United States.

During her senior year of high school in 2016, Harris was named the U.S. Polo Association’s National Interscholastic Player of the Year. Recognition continued to roll in for Harris, who just a year later was playing high-goal polo for Postage Stamp Farm at the 2017 Silver Cup tournament, the top tier of polo in the country.Harris’ talent sets her apart from the competition, but her journey to the top is what makes her stand out. Rather than growing up at the country club, Harris, an African-American woman, grew up in inner-city Philadelphia as one of three children in a single income household. Her introduction to polo happened by accident after a wrong turn in Fairmount Park landed Harris, her mother Sharmell and her younger brother on the doorstep of Philadelphia’s Work to Ride program. “We were driving around lost and I remember my brother noticing the horses first,” said Harris. “After looking around for a bit we decided to go inside, where we eventually met with Lezlie Hiner to pick up an application.”

When Harris was younger, she didn’t realize all that Work to Ride would eventually do for her. Whether it was a tournament across the country or a trip to Nigeria or Argentina, Work to Ride allowed for Harris to experience different cultures and learn polo from some of the best in the world. That experience has put Harris in a position to give back to the program in any way she can.

“I go back and visit every time I have a break from school,” said Harris. “I’m still connected with all the kids in the program and Lezlie especially. I can’t talk about my life story without Work to Ride because my life evolved from the program. I owe the program a lot due to how it changed me as a person and gave me direction in my life.”