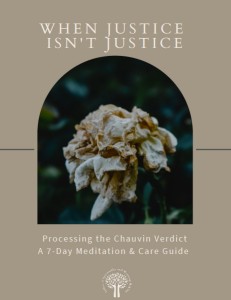 Click here to access When Justice Isn’t Justice, a 7-day guide to processing the Derek Chauvin verdict. Commissioned by the Office of Spirituality and Meaning-Making and written by Cole Arthur Riley.

To learn about other resources and processing spaces being offered, please click here. With Derek Chauvin guilty on all three charges for the murder of George Floyd, the nation continues to grapple with violence and killings of people of color, particularly Black individuals. We recognize the murder and the trial have taken a toll on one's emotional, mental, physical, and spiritual wellbeing. We encourage you to access the many support resources being offered through the Cornell community to support you.

Since the murders of George Floyd and Breonna Taylor early in 2020, protests and demonstrations have take shape across the country and around the world as people of all backgrounds rise above their fears of the COVID pandemic to address the racism pandemic infecting our nation.

As the office that oversees religious, spiritual, and ethical programming on campus, the Office of Spirituality and Meaning-Making is outraged by the unjust and inhumane treatment not only of George Floyd and Breonna Taylor, but of so many Black bodies. Together with many in our religious and ethical communities at Cornell, we grieve alongside victims of violence and their families. We mourn for those who are marginalized because of their minoritized identities. We lament the silence and ignorance from so many who remain unaware of their power and privilege and thereby perpetuate structures of racial injustice. We echo the cry of the psalmist, “How long?” (Ps. 13). We unequivocally believe that Black Lives Matter.

While statements such as these break the silence, they do not prevent violence. This moment—as with so many painful moments before it—calls us to action. Though the world’s great religious and philosophical traditions vary in their beliefs and practices, they share a common call to cultivate consciences and to work together to create a more just and compassionate world. The author Isabel Wilkerson has rightly noted that "This moment we’re in is not just a social crisis and not just a political crisis. It’s a spiritual crisis." OSMM and CURW are committed to supporting all those who desire to work at the intersection of spirituality and social justice in order to cultivate antiracist actions and attitudes.

“Prophets from Amos and Isaiah to Gandhi and King have shown how frequently compassion demands confrontation. Love without criticism is a kind of betrayal. Lying is done with silence as well as with words.”
― William Sloane Coffin

The Ally + Accomplice Meditation for Cultivating an Anti-Racist Mindset

"Creating True Peace: Ending Violence in Yourself, Your Family, Your Community and Your World" (Thich Nhat Hanh, pp.1-18)

"How to Fight Without Hating: Lessons in Power and Love" (Valerie Brown)

The Color of Compromise: The Truth about the American Church’s Complicity in Racism (YouTube presentation by Jemar Tisby)

"The Christian Imagination: Theology and the Origins of Race" (Willie James Jennings)