A Foundation of Giving

Thanks to the generosity of Fred and Judy Wilpon, and their family, in the fall of 2019 Cornell University welcomed the first cohort of the Irene and Morris B. Kessler Presidential Scholars Program, named in honor of Judy Kessler Wilpon’s parents. 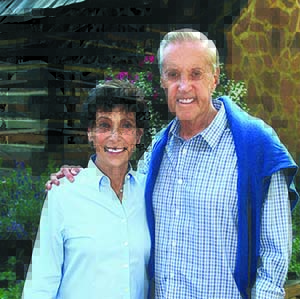 Fred Wilpon is the Chairman, Co-Founder and Senior Partner of Sterling Equities. He is also the Chairman and Chief Executive Officer of the New York Mets and a director on the board of SportsNet New York. Mr. Wilpon serves as a Trustee of the Parker Jewish Geriatric Institute, a Governor of the Real Estate Board of New York, a Trustee of the Little League Foundation, and a Member of the JP Morgan Chase Regional Advisory Board.

Judy Wilpon has been highly involved with the Long Island Kennel Club, and with the training of therapy dogs. She has a particular affinity for Golden Retrievers. Judy is also an accomplished equestrienne. She is a long- time supporter of Cornell through her involvement with the Baker Institute of Animal Health Advisory Council and the College of Veterinary Medicine Advisory Council.  Judy is also on the Board of Directors of City Center 55th Street Theater Foundation, Inc., and in 2000 received an award on behalf of the New York Mets for support of Guiding Eyes for the Blind. Her father, Dr. Morris Kessler, emigrated to the United States from Romania when he was 12 years old. Although he did not speak a word of English when he arrived in the United States, Morris Kessler graduated from Northwestern University at age 19 and went on to earn a degree in dentistry.

“By building community and connecting students with one another and with staff dedicated to their success, students in the Kessler Scholars Program are empowered to be leaders and, in turn, give back to their communities and the students who follow behind them.”    - Fred Wilpon