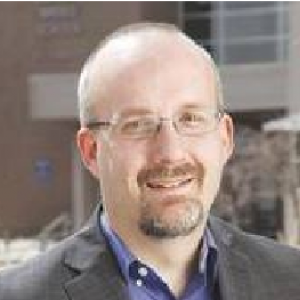 Jeff Lamontagne ’91, CALS, Natural Resources, is an alum of The Cornell Tradition. Jeff is the Executive Director of Dinosaur Ridge, a National Natural Landmark just outside of suburban Denver. It has been ranked as the top dinosaur track site in the United States, and one of the top such sites in the world. Jeff’s profession fits in with his Natural Resources major in a lot of ways. In his late teens and during his time at Cornell, he realized that he had a special interest in working in and preserving outdoor treasures and enjoying the outdoors. Jeff reflected that for him, Ezra Cornell’s motto of “any person, any study” promoted a sense of being able to go in any direction in life and set a foundation in that direction for the rest of his life.
After graduating from Cornell, Jeff’s first job was with an environmental consulting firm in the D.C. area, conducting regulatory analysis for the Department of Energy, the United States Environmental Protection Agency (EPA), and the Department of Defense. Eventually, Jeff attended law school and worked with another environmental consulting business with more of a legal focus. This business moved to Colorado, where Jeff is originally from, and he was able to relocate back to his home state. The work felt like he was utilizing teachings from his Natural Resources degree and he was reasonably happy. However, Jeff’s career would take a dramatic shift. There were four suicides at the high school in his neighborhood in one school year. Jeff, along with a small team worked together to hold a small community fundraiser. They developed a program to get professional counseling services to kids at risk for suicide who were uninsured or underinsured. The intent was that it was going to be a one-time goodwill gesture for the school, but the concept grew. It started as a volunteer measure but, because of its growth and demand, Jeff quit his consulting job and worked in suicide prevention for ten years.

Jeff’s work he says, was incredibly rewarding, despite it having nothing to do with his major. But he explained that ten years of suicide prevention was enough and that he didn't want to get “founders syndrome.” In the summer of 2012, Jeff moved on to another non-profit, Bluff Lake Nature Center, an outdoor environmental education center, and urban wildlife refuge. This position allowed him to get back to his Natural Resources roots. And in doing that, he combined the non-profit experience he had gotten from the previous ten years with his natural resources background. That same year, Jeff was awarded the Jennifer Loren Herskowitz ‘88 Cornell Tradition Point of Light Award. As a part of accepting the award, he returned to the Cornell campus to speak to the graduating Cornell Tradition seniors, touching on how valuable it has been for him to create a lifestyle based on serving the community.

As Jeff reflected on his Cornell Tradition experience he shared that he was proud to be a Fellow because it stood for hard work. “To me, The Cornell Tradition just kind of stands for inherent goodness. It stood for a measure of independence and putting forth the effort to finance your own college experience. And the community service piece--I felt like it was just a good thing through and through. And it sort of lit in me an extra sense of integrity that I wanted to live up to the values that the program put out.”

Three and a half years ago, Jeff made his professional move to Dinosaur Ridge. This world-famous paleontology site hosts roughly a quarter-million visitors a year, features exhibit halls, and facilitates viewing and touring the outdoor antiquities--dinosaur tracks and dinosaur bones! Jeff’s profession has reconnected him to his Natural Resources major, but he still carries a passion for public service. “Following your passion rather than what other people expect of you or what makes the most money is, really truly the recipe for success. Your bank account might be a little less but when you're serving the community--It's good for your soul.”