In Praise of Being Black and Alive: A Conversation between Danté Stewart and Cole Arthur Riley 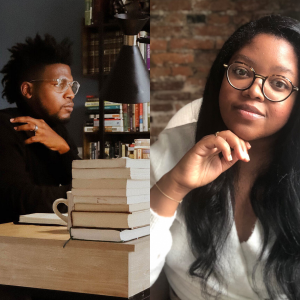 Danté Stewart is the author of debut memoir Shoutin’ in the Fire: An American Epistle, a stirring meditation on being Black and learning to love in a loveless, anti-Black world. Stewart uses his personal experiences as a vehicle to reclaim and reimagine spiritual virtues like rage, resilience, and remembrance—and explores how these virtues might function as a work of love against an unjust, unloving world. Stewart’s voice has been featured on CNN, The Washington Post, Christianity Today, Sojourners, The Witness: A Black Christian Collective, Comment Magazine, and more. He received his B.A. in Sociology from Clemson University. He is currently studying at the Candler School of Theology at Emory University in Atlanta, GA.

Cole Arthur Riley is the spiritual teacher in residence with Cornell’s Office of Spirituality and Meaning-Making. She is the creator of Black Liturgies, a space for Black spiritual words of liberation, lament, rage, and rest; and a project of The Center for Dignity and Contemplation. Born and for the most part raised in Pittsburgh, Cole studied writing at the University of Pittsburgh. Her debut book, This Here Flesh, will be published by Penguin Random House in February of 2022.

The annual Martin Luther King, Jr. Commemoration at Cornell aspires to be a cross-campus and community partnership that makes accessible the life and legacy of Dr. King for contemporary times. The King commemoration seeks to bring together Cornellians, Ithaca College and Ithaca community colleagues to plan and participate in this event. The Commemoration seeks to bridge the gap between memory and history: the memory of an earlier generation that participated in or lived during the black freedom struggle of the 1950s and 1960s; and the history of a faraway time for persons born after this period.

Speakers for the King Commemoration have included those who worked directly with or knew Dr. King, and scholars, activists, journalists and religious leaders whose work is informed by and a continuation of his legacy. These speakers have highlighted the continuity between past and present, providing critical examination of King's legacy and contemporary issues. The issues with which Dr. King grappled — racism, poverty and income inequality, war, militarism, imperialism, governmental abuses of power, barriers to community-based on ethnicity, religion, creed — remain with us today. These very issues currently constitute a greater threat to American democracy than at any time since his assassination in 1968. The manner in which these issues are addressed will determine our collective future as a society.

This annual cross-campus/community partnership to commemorate Dr. King, a composite of the "Beloved Community" central to his thought and action, strives to be a local example of collaboration across real and perceived stratification to promote moral values and social justice.