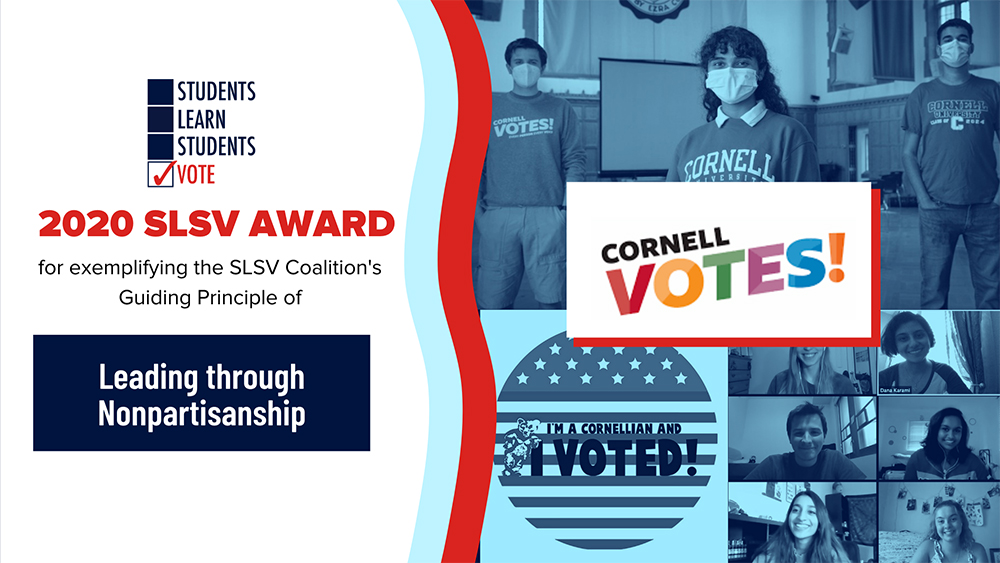 On Friday, December 4, Cornell Votes, a university-wide non-partisan campaign to increase voter registration, turnout, and civic engagement on Cornell's campus, received the 2020 Students Learn Students Vote (SLSV) Award for exemplifying its Guiding Principle of Leading through Nonpartisanship. "We understand that participating in the democratic process is not political, it's constitutional," Clarissa Unger, Director of the SLSV Coalition, said. "We're not about partisan politics or turning out potential voters for one party only; we focus our time and energy on supporting all voters, unconditionally. Cornell Votes perfectly exemplifies the principle of Leading through Nonpartisanship."

Since relaunching under this new name in the winter of 2019, Cornell Votes has dedicated itself to building a coalition with student groups, staff, and faculty around voting regardless of party affiliation and political views. "It was fantastic to be recognized for our commitment to nonpartisanship. In such a polarized political climate, it is relieving to see students unite to mobilize the youth vote and make a change," said Victoria Healey' 22, College of Arts and Science and Vice-President of Finance for Cornell Votes.

Housed within the Cornell Public Service Center, Cornell Votes set out to increase voter registration, turnout, and civic engagement. Because of the pandemic, Cornell Votes had to pivot quickly, utilizing social media and texting to promote voting. They also held many workshops and events to train leaders across campus on voter registration and being ballot ready by providing resources to make the voting process more accessible.

"We are so incredibly thankful for all the Cornellians who turned out to vote," Patrick Mehler, President of Cornell Votes, said. "This work was only successful because of a collaboration between an amazing team of students, wise advisors and an advisory committee, the support of Cornell University and the Public Service Center, and all the Cornellians who truly believed in their democracy and voted."

Krista Saleet, Director, Public Service Center, adds, "It is an honor to be recognized for the institutional effort to support voter engagement that is core to Cornell's commitment to public service. Voting is fundamental to the community engagement work we do at Cornell's Public Service Center. Today's college students are tomorrow's leadership in communities all across the world so it is important for us to stress voting as a habit to representation, voice and progress. We are grateful for the recognition of our efforts to expand the vote during this pivotal election."

The SLSV Coalition broadcasted the virtual award ceremony on their Facebook page on December 4. You can access the full recording here.