Since its inception, CURW has provided programs and projects that stimulate and expand the religious imagination of Cornell students, faculty and staff. OSMM has built upon this tradition by creating new programs and expanding the reach of existing programs to a broader audience. Some of these programs have been developed and sustained by generous benefactors, while others are collaborative efforts between OSMM and various university departments.

All of them are open to the entire university community and the general public. These programs include:

This lecture is named in memory of the Rev. Robert W. Beggs, an Episcopal priest and CURW affiliate, and Mabel Beggs, a co-founder of the Foundation of Light Spiritual Center in Ithaca. They bequeathed to CURW an endowment for a lectureship on science, spirituality and society in consultation with Science and Technology Studies and Religious Studies. Emphasis is placed on ethics and public policy, comparative religions and the interplay between science and religion to illustrate, in Rev. Beggs’ words, “science and religious spirituality can work hand in hand for a better world society.”

The 9th Annual Harold I. Saperstein '31 Cornell Student Topical Sermon Contest challenges you to address: The Ethical Economic Issues of Today. The contest is open to all Cornell University undergraduate and graduate students.

A Conversation with Yusef Salaam
For over two decades Yusef Salaam, Antron McCray, Kevin Richardson, Raymond Santana and Korey Wise were known as “The Central Park Five.” All five men (then boys) were wrongfully convicted in the infamous 1989 Central Park jogger case, and Salaam spent over six years in jail. He was exonerated in 2002. Now known as one of the “Exonerated Five,” Salaam has committed himself to educating the public on issues of mass incarceration, police brutality and misconduct and the disparities in America’s criminal justice system, especially for young men of color.As we commemorate the legacy of Dr. Martin Luther King, Jr., join us in a conversation with Yusef Salaam led by Anna Haskins, assistant professor in sociology. Q&A to follow.

Free, open to the public and accessible.

This event will NOT be recorded or livestreamed.

The annual Martin Luther King, Jr. Commemoration at Cornell aspires to be a cross-campus and community partnership that makes accessible the life and legacy of Dr. King for contemporary times. The King commemoration seeks to bring together Cornellians, Ithaca College and Ithaca community colleagues to plan and participate in this event. The Commemoration seeks to bridge the gap between memory and history: the memory of an earlier generation that participated in or lived during the black freedom struggle of the 1950s and 1960s; and the history of a faraway time for persons born after this period.Speakers for the King Commemoration have included those who worked directly with or knew Dr. King and scholars, activists, journalists and religious leaders whose work is informed by and a continuation of his legacy. These speakers have highlighted the continuity between past and present, providing critical examination of King's legacy and contemporary issues. the issues with which Dr. King grappled — racism, poverty and income inequality, war, militarism, imperialism, governmental abuses of power, barriers to community based on ethnicity, religion, creed — remain with us today. These very issues currently constitute a greater threat to American democracy than at any time since his assassination in 1968. The manner in which these issues are addressed will determine our collective future as a society.A cross-campus/community partnership to commemorate Dr. King, a composite of the "Beloved Community" central to his thought and action, can be a local example of collaboration across real and perceived stratification to promote moral values and social justice.

The Office of Spirituality and Meaning-Making and Cornell United Religious Work have partnered with Vennly to share spiritual wisdom and inspiration with the Cornell Community. Click the links below to listen to short podcast perspectives from our staff and affiliates.

Oliver Goodrich, "Meaning-Making in the Time of Coronavirus"

Due to the university’s updated event restrictions regarding the concern over COVID-19, the remaining Soup & Hope talks scheduled for March 12 and March 16 are canceled. Thank you to everyone who attended these events. We hope to see you next year!

For more than a decade, dozens of Soup & Hope speakers have touched, inspired, motivated, and stirred the hearts of those who gather during the winter months at Sage Chapel. Stories come from a wide range of Cornell staff, faculty, students, alumni, and community members. They reflect diverse personal, cultural, religious, political, and philosophical beliefs and experiences. Each story is shared among friends and colleagues, over bowls of hot soup & bread. 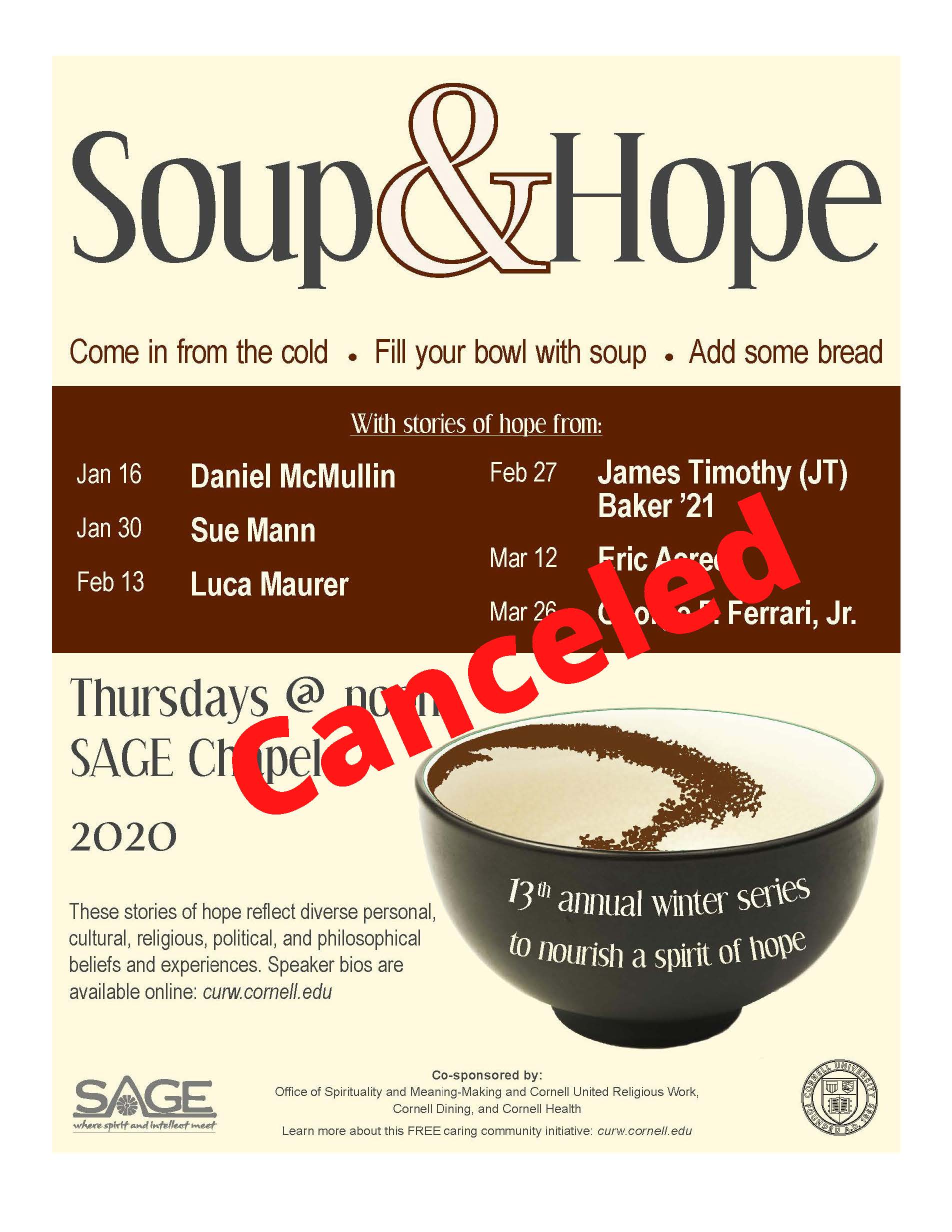 If you have a suggestion for future speakers who could speak to the idea of hope by sharing a personal story or perspective, please email a member of the Planning Committee and tell us: